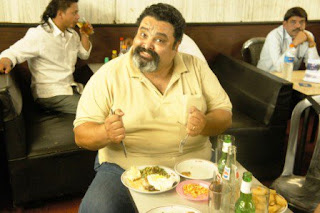 Came to know a lovely couple,the Dalals through friends.Kurush Dalal is an archaeologist and a caterer(and a humorous and jolly guy,quite evident from the photo taken by Kalyan Karmakar, above) while his wife Rhea Mitra-Dalal is a freelance content writer and also writes a food blog.After reading my post on Highway Gomantak,Rhea recognised my aunt,Mrs Acharya as being her music teacher during her childhood! Such a small world!

It was only later that I discovered that Kurush is the son of the well known author and archaeologist Katy Dalal,who passed away, a year ago.It was she who started the business in 1976 and Kurush worked with her till he went away to Pune to complete his M.A and PhD.He then launched Dalal Enterprises in 1998 and there has been no looking back. 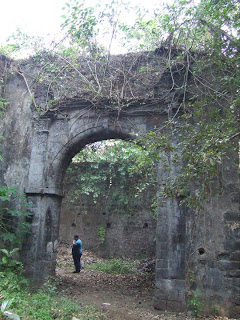 While his mother excavated Pre-Harrapan ruins in Northern Rajasthan,Kurush's archaeology trips have been all over Maharashtra...Revdanda,Murud,Janjira,Vadgaon,Siddheshwar and recently to the Konkan...Chandore.He is able to give time to both food and archaeology thanks to the wind beneath his wings...his Bengali wife Rhea. 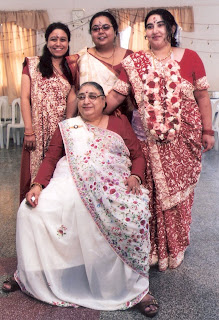 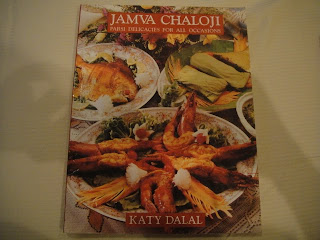 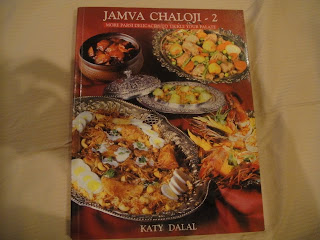 His mother published "Jamva Chaloji","Seafood Fiesta" and Vitality (a book on vegetables and their nutritive content and benefits). I have copies of Jamva Chaloji and Jamva Chaloji 2.I am told that the first book had three editions and is now out of print.
The first book talks of Parsi wedding food and the call of the caterer at the beginning of the wedding feast "Jamva Chaloji"...meaning "come to eat".I like the second book better as it has a lot more history....how Parsis came to India and lived at Sanjan near the Gujarat-Maharashtra border,how Parsis were into toddy farming and the concept of "Gambhars".Kurush Dalal has catered for one such Gambhar,a community event started to get the people together as womenfolk and kids lived in villages and the menfolk in jungles.Here food is provided free and included Istoo,Papeta Ma Marghi and Dhansak Dal.
She talks of toddy which is the sap of the date palm and it reminded me of the sweets made with date palm jaggery by Bengalis.In her book she has included a recipe of Drumsticks cooked in Toddy.Parsis too used it to make sweets.
In these books,you will find unusual recipes such as Tarkari Per Eda (Eggs on Mixed Vegetables),Mud Fish Patia,Parsi Pora and Bawaji Nu Bhujan (Grandfather's Barbecued Chicken) 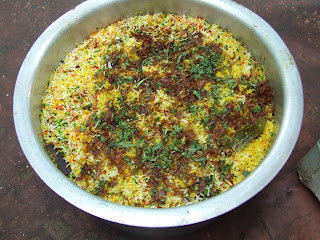 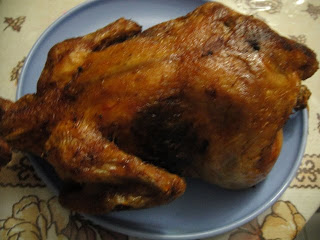 I tried their Whole Stuffed Roast Chicken which was marvellous.It was plump,juicy and tender....stuffed with mince,apple,sultanas and a whole boiled egg.It was enough for six people! 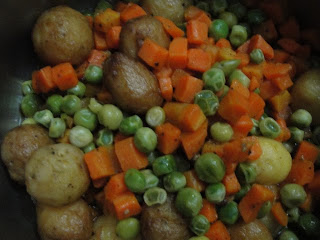 The Boiled Vegetables that accompanied the chicken were also flavorful unlike the bland veggies that are served in most places.
When ordering,one has to give a day's notice to them as they buy all ingredients fresh and make the dish.They deliver a minimum of four portions and each is quite substantial.
I can't wait to try their Dhansak! They have received an award for being the Best Parsi Caterer!

Kalyan Karmakar said…
And I was lucky enough to meet him...and don't worry, while the dhansak will get a bit delayed you can have his laganu custard tomorrow :)
March 13, 2011 at 12:54 AM

Sassy Fork said…
Looking forward to Lagan Nu Custard amd the Bengali food.Wish Rhea and you could have joined us, Kurush!
March 13, 2011 at 11:14 AM

Popular posts from this blog 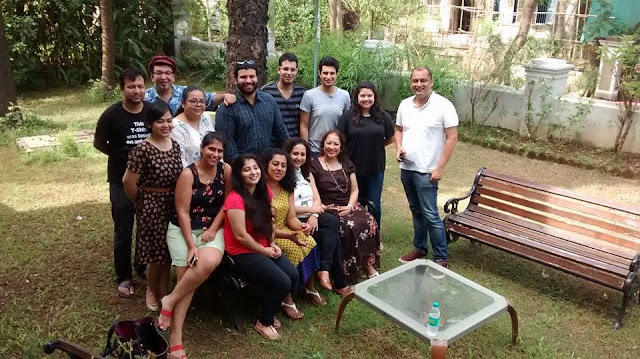 Had a fascinating time at Malcolm Baug,Jogeshwari,thanks to the invitation of my friend Perzen Darukhanawala Patel (also known as Bawi Bride ) at the lovely Jer Villa. Baugs are colonies set up by Parsis,mainly the N.M. Wadia Trust and this one is so named as it was bought from an Englishman named Malcolm.This was earlier a hunting ground.We were privy to these lovely stories, thanks to the presence of our friends and archaeologists Kurush and Rhea Mitra Dalal.Malcolm Baug has been developed like a hill station and has quaint bungalows with lovely gardens. Baugs were set up for needy Parsis by Bai Jerbai Wadia and her sons.Others include Cusrow Baug,Navroz Baug,Rustom Baug,Jer Baug and Ness Baug which are gated communities that have buildings and gardens.A nominal rent is collected but the upkeep is undertaken by the trust. Arrived there with my lovely food blogger friend Romi,her humorous hubbie Gaurav (actor,anchor and of the radio station Fever) and India Food Network
Read more

Getting To Know Tibetan Cuisine 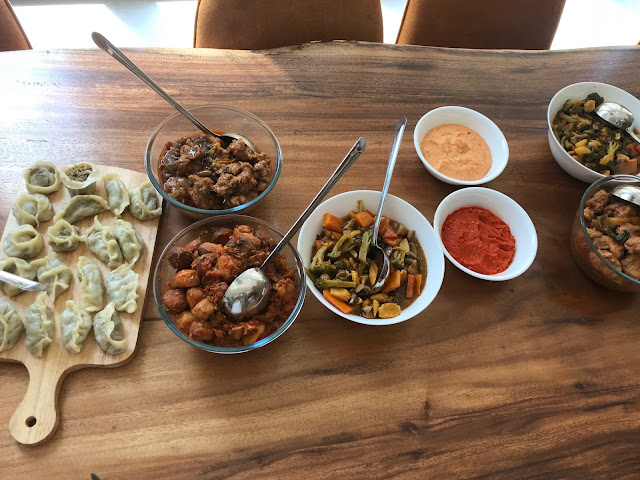 Tibet lies to the north of India.Its inhabitants have traversed far and wide in India,spreading their culture and cuisine,particularly in Dharamsala,McCleodgunj,(Majnu Ka Tila)Delhi,Kolkata and Bylakuppe (Karnataka).Momos are popular all over the country with even food chains being launched that serve mainly momos.There is ofcourse more to Tibetan cuisine as we learnt on a Sunday afternoon at the Foodhall Cookery Studio at the Tibetan Community Cooking Class organised by Authenticook (a venture that  brings home chefs to the forefront) Our teacher that day was Esha Sahoy Lepcha whose grandparents came from Tibet.She taught us dishes that are a part of Tibetan homes.....Suja/Butter Tea,Momos,Thenthuk and Ema Dashi (Bhutanese but enjoyed by Tibetans as well) The class had eight students, some of whom had eaten Tibetan food before.I have tried some dishes at Sernnya at Andheri and got to know that the owner is Esha's uncle! Our cooking class started with Butter
Read more On the day after Ganesh Chaturthi,women do the Rishi Panchami Puja for the Seven Sages and a special bhaaji called Rishi Panchami Bhaaji is made.This made of bitters and meant to cleanse the body ,while the Puja done to show respect to the ancient sages, cleanses the soul. The sages ate very simple food and that is the basis of this bhaaji.On that day food is to be eaten once in the day as did the sages.They used to eat leafy vegetables cooked in a simple broth.Here we add Ambat Chuka,Maat,Chauli (leafy greens),radish,corn,drumstick,red pumpkin and bitter gourd to coconut milk and tamarind and simmer it.That is Rishi Panchami Bhaaji for you. Sudha Aunty tells me the vegetables are grown and plucked by hand just like the sages did.
Read more

Sassy Fork
Bon Vivant and Explorer,yeah,that pretty much sums me up.Nothing excites me more than learning about a new culture.Here's a log of my journey...